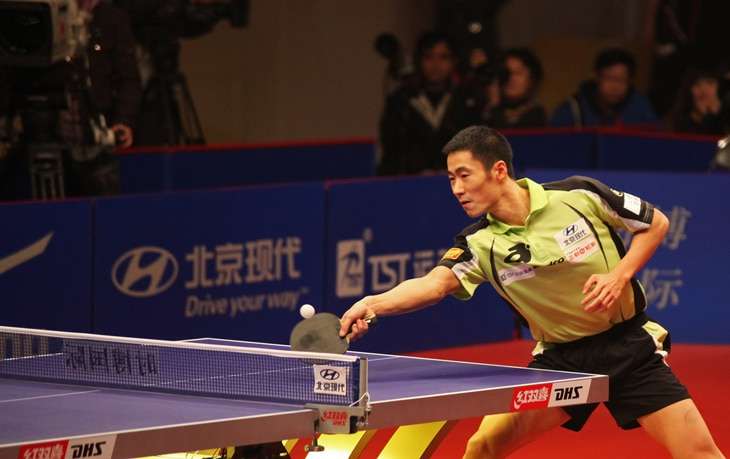 A true fan of the sport knows who the best athlete in the field is! Old Waldner may be the best table tennis player that comes to mind. I would have to agree that Old Waldner, really, is one of the best. Unfortunately, since he is retired, he can no longer add more trophies and achievements up against his sleeves!

This younger generation of athletes has a lot to catch up. However, the sport had evolved pretty fast, and athletes like Ma Long and Zhang Jike has achieved a lot, and they are not over thirty years old yet! Promising younger players like XU Xin and ZAN Zhendong are climbing the ladder of achievements at a staggering rate!

​These guys have set the bar pretty high so it would require more than having a table tennis table to be as good as them!

But who is the best table tennis player? Let’s take a look at the top 5 players that ITTF listed according to their ranking. Let’s start with number 5! Dimitrij is one of Germany’s representative in the table tennis Men’s team that played at the 2008 Summer Olympics. They went home with a silver medal from the Olympics. He faced some challenges in late 2010 but regained his eligibility to play table tennis.

In 2012 Summer Olympics, Dimitrij took the bronze for the singles and team category, respectively, for Germany. In 2015, Dimitrij beat Marcos Freitas of Portugal and went home with a gold medal at the European Games. He lost the singles to Vladimir Samsonov but won the German Team a bronze medal in the 2016 Olympics.

With a determined mindset and laser-focus, he became the number 1 table tennis player in January 2018. Competing for the first rank is extremely difficult, and many other players are eying the top spot. Today, he holds the fifth position in the ITTF ranking. At number four is another esteemed German athlete that played for the Olympics along with Dimitrij Ovtcharov. This thirty-seven year old was hailed as the number 1 table tennis player in 2003, 2011, and in 2018. However, today, he only holds the fourth position in the ITTF ranking.

He started playing ping pong when he was a toddler. His father coached him and thought him the basics of the sport. Timo started his career at the age of eight. He is one of the youngest players of the National League and quickly gained fame.

He beat Vladimir Samsonov in 2002 and gained international attention. He was hailed as the 10th best table tennis player in Germany in the same year. He faced the seasoned Old Waldner in the 2004 Summer Olympics. However, he lost. This young lad is just 23 years old and has managed to reach the third rank in the ITTF. Like Timo, he, too, started playing table tennis at a very young age. He is full talent but hasn’t won major championships immediately after he went professional.

He had a lot of matches that he almost won, however, fortune did not smile on him. It was just last year when his career entered the fast lane. He gradually climbed the ranks and won the Asian Cup. Just this year, his team won the World Team Championships and the Team World Cup held in Halmstad and London.

Presently, he holds the 3rd spot of ITTF’s top 10 table tennis players. At 23, he has a lot of potentials to become the greatest player of all time. What will happen to him in the next decade? Who knows? Today, he’s just two ranks away from number one. Xu is currently holding the 2nd spot of ITTF’s top 10. At twenty-eight years old, he holds 13 World Tour championships since 2010 up to present. One of his notable matches was in 2014 where he beat Ma Long and defended his title as the ITTF World Tour Grand Finals in Dubai.

He uses a penhold grip and is among the few Chinese athletes practicing such. His long arm span has enabled him to conquer tournaments and return every rally that comes his way. He is known for his spins and deceptive serves. He has been noted to relentlessly practice and reinvent serves to come up with a lot of different variations and perfect each style.

With his southpaw stance and creative serves, many opponents are intimidated by him. At twenty-eight years old, he has a lot in store for his career. Getting the top spot was not easy. He held and protected the second place for 29 months until he was able to snag the number one rank. It took relentless hard work and training to win tournaments. Looking at Fan’s impressive record since 2013, no doubt that he has a lot more for him in store.

That includes the singles category only! It does not include his doubles, team, and 2018 achievements! Surely, it would take tremendous work and effort to beat this guy and conquer the top spot! And one more thing, he’s just 21 years old.

The Future of Table Tennis

With these fierce athletes at the top of the ranks fighting for the best table tennis player title, it would be quite difficult to set a new record. Beating those guys would require tremendous training. But it sure is exciting to see their matches!

Do you want to be as amazing as these table tennis players? If yes, then you should get started on training and honing your skills. To determine what are the table tennis equipment you may need, please check these buying guides.