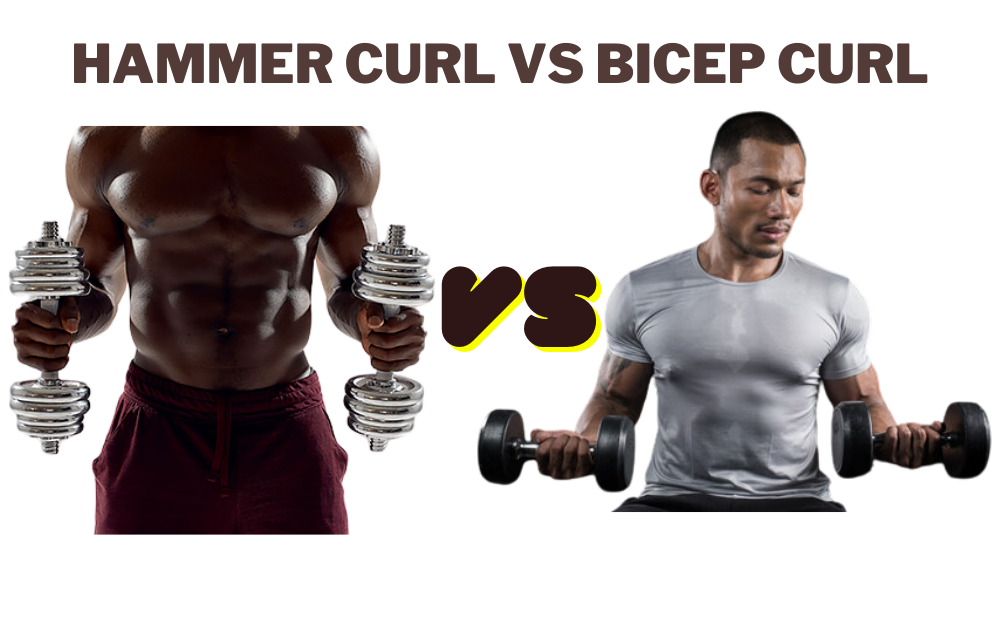 If you want to develop a particular muscle, you need to choose the workouts. In this article, we’ll discuss two types of exercise regimes; so that you can choose better.

The first one is the Hammer curl and the second one is the Bicep curl. These two exercises focus on bicep muscles with some differences between them. Both of them have pros and cons and we’ll learn about them from the hammer curl vs bicep curl comparison.

Bicep curl is a classic weight-lifting exercise.  Bicep curl muscles worked are upper arm muscles and to some extent the lower arm. They are the brachialis and brachioradialis to be specific. The bicep curl is completely beginner-friendly and it’s very easy to learn.

The basic setup is to stand up tall with feet wide apart and hold one dumbbell in each hand. Here, you should relax the upper muscles and bend the elbows when you lift the weights.

Breathing is an important part of the bicep curl. You should exhale while lifting and inhale when you are lowering your hands. Ensure that you are not going too fast as smooth motion and your elbows are in the proper position.

One of the amazing benefits of the bicep curls is that you can change them according to your need.  This can make the exercises more challenging and rewarding at the same time.

For example,add a rotation of your wrist while raising and lowering the dumbbell. This will turn bicep curl into a Zottman curl. Zottman curl works mostly on the bicep muscles. Especially when you are working out for full arms.

You might wonder whether Zottman curls better than bicep curls. Both have their separate purpose. If you are working out for the training of your biceps only, bicep curls are the better. But if you want to train both your full arms and forearms, then Zottman curls are better.

It’s a modified version of the bicep curl exercise. This is using a natural grip and palms facing each other. That makes it different from the traditional bicep curl.

The major focus here is on the elbow flexors. It means the muscles that help to bend the elbow and bring your hand to your shoulder.

Doing hammer curl exercise can be easy if you follow the proper stance and steps. When standing tall, hold the dumbbells at your sides and keep your palms facing each other.

your back should be straight and the elbows are against your sides. The initial step is bending the elbows while raising the dumbbells. Wait two seconds and lower the dumbbells slowly. Remember, throughout this exercise, your palms should face each other.

The grip provides the opportunity to lift more weight compared to the bicep curl. Thus, hammer curl helps to strengthen the elbow and forearm muscles. The nature of the hammer curl exercise lets the impact go into more inner parts of the bicep muscles.

The brachioradialis is an upper arm muscle. It is spread between the elbow joint and the forearm. It also helps the flexion of the elbow and provides mass to the forearm.

Finally, the brachialis is another upper arm muscle. It is attached to the ulna bone. It is the strongest flexor of the elbow while doing the hammer curl exercise, but it’s hardly visible.

A slight modification of the hammer curls is the cross-body hammer curls.  lift the dumbbells one by one. After lifting, the dumbbell should be brought towards the chest.

In cross-body hammer curls, the palms should be facing the chest.Whereas, in hammer curls, your palms face each other. It’s also a very good exercise for the long head of the bicep muscles than the standard hammer curl.

Bicep curls vs hammer curls, which one is better among these two – can lead to an endless debate. Both of these exercises have their own benefits and methods.

Actually, it’s pretty simple. If you are interested in getting bigger arms as soon as possible, then hammer curl is your thing. Doing regular hammer curls will lead you to that goal very quickly compared to the bicep curls.

Bicep curls work on the bicep brachiis. Whereas hammer curls cover a wide area of the upper body.

Ans: It’s not about which one is better or which one is worse since the comparison is meaningless without the goal. If you want the biceps to be bigger and faster, choose hammer curls.